What does language reveal about how we think about time? Why do look forward to the future, and back into the past? And how does this vary across languages?

Time is strange. We can’t see or hear it directly, and philosophers seem to be having a hard time pinning down what it actually is. Regardless of how abstract it is, it at least feels really real – the years pass by faster and faster, and deadlines are always just around the corner.

For such an abstract concept, it helps to have some way of thinking about it that makes it more tractable. Clocks and calendars are really good at this, because they allow us to visualise time spatially. But what about words? How do we talk about time?

Here’s where things start to get interesting. If you do a bit of searching, it’s not hard to find examples where we talk about time as if had spatial attributes. For instance, we might arrange to meet a friend in an hour, as if an “hour” were something that we could be “inside”. We can also be on time, work from nine to six, and reach home at seven. In English, there’s no term specifically devoted to measuring temporal quantities, like “duratiousness”. Instead, we say that things take a “short” or “long” time.

So it seems that we often speak of time using spatial metaphors. This in itself is a curious idea, but just for the fun of it, let’s do perhaps a bit more thinking than the situation deserves!

All this talk about space and time seems to suggest that we can try and map things out – what does our language suggest about our mental models of time? To be more precise, let’s draw a 1-dimensional time axis​1.

From our experience, we might expect it to look something like this, with past, present and future. But wait – words like “present” are defined relative to an observer, so we’ll need to draw in a person as well.

One way to do this would be to make the person moving along the time axis, with the past constantly behind and the future constantly ahead. This assumes a stationary time axis, but what if we’ve gotten it the wrong way round? Perhaps we’re standing at this point called the “present”, and time is flowing towards us!

How do we know which of these two views is correct? To test this, try and answer the following question:

Next Wednesday’s meeting is moved forward two days. Which day is the meeting now?

If you think that the answer is obvious, I encourage you to ask your friends for their opinions. Trust me, you’ll be surprised!

Most answers are either “Monday” or “Friday”, and the original psychology experiment that asked this question found a 50-50 split in the responses. This certainly came as a surprise to me, because I was adamant that the correct answer would be “Friday”. So what’s behind this result?

In the study, the authors suggest that different people have different mental representations of time. If you thought that the answer was “Monday”, then you see yourself as stationary and time as flowing towards you, i.e. the time-moving perspective. Moving the meeting “forward” would mean moving the meeting in the direction that it was already heading; relative to the meeting.

Fig 3: Is the meeting now on Monday or Friday?

If you’re like me thought that the meeting would be shifted to Friday, then you instead see time as a stationary axis that you move along, i.e. the ego-moving perspective. In this case, “forward” is direction that the observer “moves” along; relative to the observer.

The researchers further found that they could change the proportion of answers from participants using spatial cues. For instance, subjects that rode an office chair across a room were more likely to answer “Friday”, because this primes the brain to think of us as moving through a fixed absolute space. Conversely, those who pulled an office chair toward them with a rope were more likely to answer Monday, with the environment “moving” past us and priming the time-moving perspective.

So depending on how you want to look at it, both “Monday” and “Friday” could be correct. What this implies is that the way we think about time is very closely tied to how we think about space, and also changes with context. If our brains have been primed appropriately, we may be more likely to adopt an ego-moving perspective and vice versa. Good luck making it to the meeting on time!

How to Travel Upwards in Time 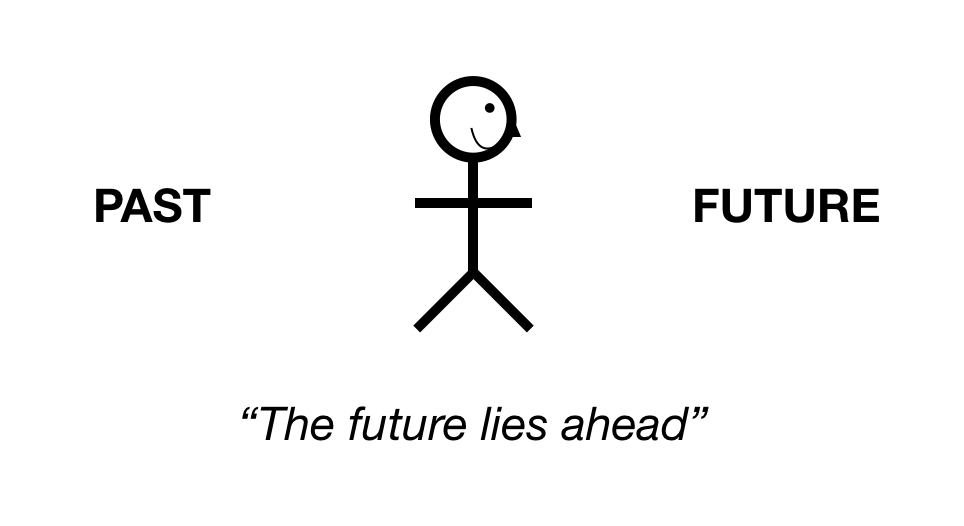 Fig. 5: Representing the future as ahead and the past behind

Another thing that we could consider is the direction of the observer relative to the time axis. We’ve assumed that the future “lies ahead”, but what if it isn’t? Why don’t we say that the “future lies behind”, for example? 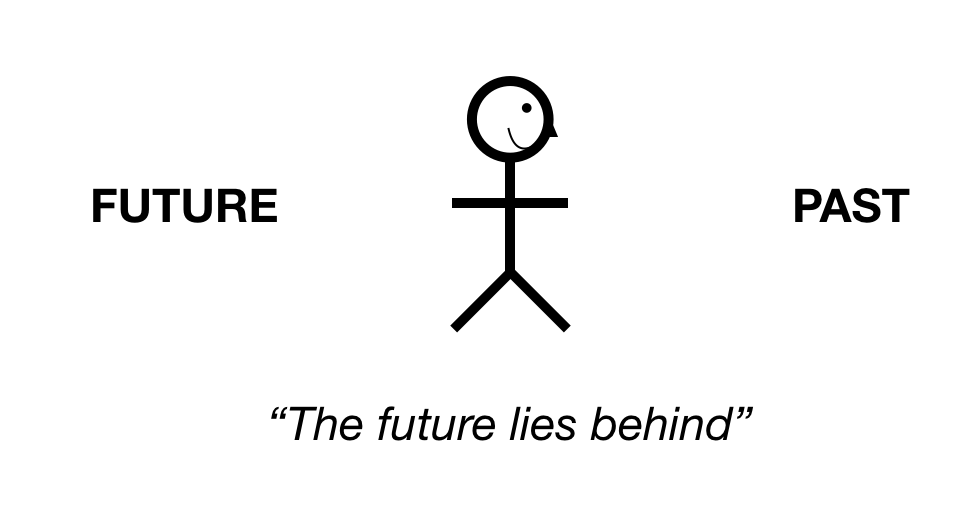 Fig. 6: Seeing the past in front of us

Believe it or not, this is exactly how the Aymara people seem to visualise time, where the word q”ipa, roughly meaning “behind” or “the back”, is used to talk about the future. We also see similar features in other languages. The Māori proverb, Kia whakatōmuri te haere whakamua translates to “I walk backwards into the future with my eyes fixed on my past”. In Malagasy, past events are referred to with words that connote forwardness. An interesting explanation is offered for this: the past and present are known and so exists “before one’s eyes”, but the future is as yet unseen and so lies behind.

But why stop here? What if the time axis isn’t horizontal? In Chinese languages, “last year” is literally said as 上年 “up year”, and next year is 下年 “down year”. There’s one more example that I find especially intriguing. Thus far we’ve seen examples where the axes are oriented relative to the observer, but what if the time axis were absolute and fixed?

For the aboriginal Pormpuraaw people, the time axis is fixed according to the cardinal directions. Unlike in English, where we talk about space in relative terms like “left” and “right”, Pormpuraawan languages are inextricably linked to absolute space​2​. To able to communicate, you would need to be constantly aware of where East and West are! In a study by Lera Boroditsky and Alice Gaby, the authors write:

In Kuuk Thaayorre (one of the languages included in this study), to say hello, one says, “Where are you going?” and an appropriate response would be, “a long way to the south-southwest.” Thus, if you do not know which way is which, you literally cannot get past hello.

Their mental representations of time seemed also to resemble the way that they thought about space, with the past in the East and the future in the West, perhaps relating to the apparent rising and setting of the Sun.

So when we say things like “the future lies ahead”, or “I’ve put the past behind me”, we’re really using a very particular way of visualising things that may not be common across different cultures. Different people can look at the same world in myriad ways, and it can be all too easy to treat our views as gospel.

Much Time No See?

For most of this article, I’ve talked about how our temporal understanding of time is often achieved using a metaphor with space. While there are many examples to support this view, it worth noting that this is by no means a hard-and-fast rule, and that many exceptions exist.

For instance, if you’re a Spanish speaker, you’re more likely to say mucho tiempo or “much time” instead of “long time”, and similar patterns can be found in Greek and Italian. Rather than picturing time with spatial axes and lengths, it is interpreted as something with volume.

Many of the patterns we’ve seen are also heavily context dependent. Chinese speakers don’t only use vertical space-time metaphors – while “up year” might refer to “last year” with a vertical time axis, 前年 “front year” means “the year before last year” with a horizontal time axis. Linguists seem to have different interpretations of how to reconcile these differing metaphors, and in general it can be quite hard to give consistent explanations across multiple contexts.

There are countless other interesting questions that we could examine if we dive deeper, like the effect of writing direction and the mental representations of time in bilinguals and polyglots. But these are probably best left for another day. What I hope I’ve shown through this article is that even for something as universal as time, there is a diverse set of ways that we can think about it. In English, we have a habit of speaking of time in terms of front-back spatial metaphors, but maybe there’s more to that than meets the eye.